Words of Wisdom from The 16th Dalai Lama - 1st Post

On Friday, June 16th, the San Diego community was embraced by the 14th Dalai Lama and given a key to the City of San Diego from Mayor Faulconer.  I was in the front row thanks to my gracious friends! 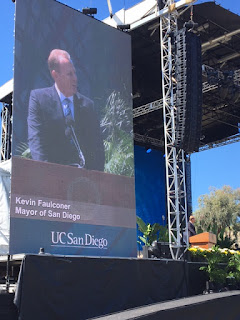 The very next note I have (because I was taking notes) is that "Everyone wants a happy life - it's our right".  The pursuit of happiness is literally written in the United States Declaration of Independence.  "Life, Liberty and the pursuit of Happiness".  I could dissect this carefully but I'll leave the reader with something more simple:  How do you personally define happiness?  How do you pursue it?

The Dalai Lama then went on to explain why we now have the problems we have that prevent every human on the planet from pursuing their own happiness and creating a world of brothers and sisters.  It is man-made.  (He added that it is not female-made because then we wouldn't have these issues - but MAN-MADE).  And- it comes from a lack of oneness of humanity. 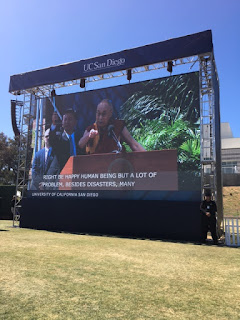 As I see it, the issue that is tearing up not only our political spectrum but even families in the US society (because I can't speak for other countries), is that- lack of oneness of humanity.  A percentage of our citizens have decided to only care for their own communities, whether that means the town boundaries of where people live, their race, or their own particular country.

I have had conversations with individuals where I state:

"We're all in this together" - because I truly believe that a team is only as strong as it's weakest member- and this extends to the entire country and planet.

Only to be rebuked with:

And just like that, one human's life is more important than anothers.

This, to me, brings on more questions.

I do not believe that everyone who feels this way does not care about others.  Because these are loving people that would bring a meal to a neighbor in need or pray for the health of someone they do not know.  They probably also donate to local causes, shop at local stores and would hopefully help a bloody child at the neighborhood playground.

The logical explanation is that they believe that by investing in their own communities, they will receive a return 'of sorts' from that investment.  The meal will help the family continue to thrive in the community, providing love (intangible) and a solid economy (more tangible and measureable).  The prayers will provide support within the faith-based community and theoretically heal the health of the ill individual.

I admire that families, individuals - even voters - want to support their families and their communities. 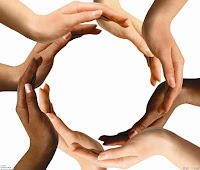 I have ran into someone that I graduated high school with while waiting in line to climb the tower of Notre Dame in Paris.

I have transported clothes from one sister in the US to another sister of the same order in Slovakia.

I have witnessed the challenges of working in a multinational company hoping to compete against other countries and companies doing the same.

I have seen the destruction of exploitative companies and governments and the abuses that go along with it.

I fear for another's life when I buy a shirt made in Bangladesh.

I have sent university student who were paying my salary to a friend's restaurant in London.

I know how interconnected our world is.

I have seen what our buying choices and energy waste can do to another economy and what that means for another community's pursuit of Happiness.

It also has effects locally too.  ("Bring jobs back")

Perhaps this is why the Dalai Lama's words were so impactful for me.  Because I have seen this and know it to be true.  Our 'lack of oneness of humanity' gives way to destruction in other places.

However, the truth is that the indirect benefits of supporting other communities are visible!  How would the young girl from another town over ever do well in school and become a productive member of society without food?  (read: productive member of society = tax contributor) What about the corn growers in another state?  They need prayers too - and to know they are loved - because how else would we have abundant corn-on-the-cob over the summer?  And, helping a bloody child from an innocent fall at the playground means that they will feel loved, know that someone cares and theoretically be guided out of making not-so-innocent choices that could affect an entire country if joining a force of evil.  (terrorism or otherwise)

These are logical explanations for creating a oneness of humanity.  The emotional explanations are also strong!  If you feel for other humans, you should feel that we are all in this together.  "This" can be defined as life, liberty and the pursuit of happiness.  To do otherwise would make me and others believe that you simply don't care about other humans.

The 14th Dalai Lama implores us to find universal compassion based on a sense of oneness of humanity.  Please take his words to heart - he has lived in exile and has seen and experienced things that are unfathomable in our society.

I will leave you with one more note from His Holiness:

"Different cultures are like different flowers in a garden." 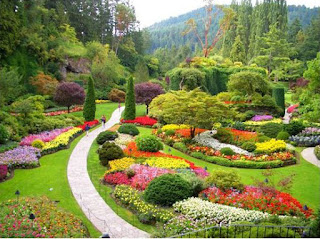