What was the grand strategy?

Did the Castro's really believe that capitalism was going to fall?  Were they looking for power or did Fidel want to help his people and therefore built a 'revolution'?  How does Cuba's communism compare to other versions I've seen?  How are the reforms going?  Is their current 'opening' going to cause any environmental destruction or inequalities?  Will Cuba ever have private education?

Truth be told, I admire the regime.  They have done a better job of organizing the country than some Western countries.  From what I could tell, the oppression I was bracing for, doesn't exist.  Of course, I wasn't there in the in the 90s and I tend to believe that the 'not so good' areas of Cuba are hidden from tourists and/or Americans.  Either that, or I'm a socialist.

The buildings are dilapidated and an urban planner showed us precisely why.  The average salary is $20 USD a month.  A gallon of paint is roughly $7.  That doesn't leave much to live on if you want to feed your family.  The restriction on cars is fascinating.  There are only old American cars from the 50s, a collection of Soviet-era cars and then new ones that Raul has decided to allow in 2008, BMW, Mercedes, Geely (Chinese).  I even saw a few Skodas.  Every dashboard, aside for the well -refurbished ones we toured in for an afternoon, has a mish-mash of parts; made in Czechoslovakia, Cyrillic writing and Honda cooling systems.  And, of course, the highly educated Cubans who are doctors and lawyers are not the top of the socio-economic ladder, it's the ones who work in tourism and deal with the CUC (the currency used for tourist and foreign investors- CUP being the national currency)  We met an English catering gynecologist who was working as a waiter because it pays better.  These are all reasons why the regime has started to make reforms and has invited foreign investment, on their own terms of course.

It can be argued that the huge influx of American tourists will bring about the ugly changes that no one likes in an overly touristic community (pick-pocketing, swindling, over-charging, etc), but, as the woman of the casa particular I stayed in, who was a very opinionated woman, told me, "We've always had tourists".  It's just the Americans that haven't been around for decades.  We're also the likely candidates to turn in a car once it's passed 100K miles.  Or once the muffler rusts through, or the dash doesn't work, or it's been totaled by two deer.  The Cubans are incredibly resourceful and
just like the cars, they already have in place a Marine Protection Agency, which cites a study done over 40 years of the destruction of the Florida Keys coral and marine life using GIS.  This is according to an Economist who works for the University of Cuba- he may or may not have been simply telling us a story to show they are prepared for reform; I've also heard they have let a lot of the coastline self-degrade.

The bars we went to in La Habana seemed no different than higher end bars in developing countries.  The Fabrica de Arte Cubana was truly an experience, a place where youth gather, wait in line in mini-skirts, pay a cover, grab a mojito or rum and coke and look at art or dance all night.  Inside, it felt like a combination of the Nacional in Madrid, Double Deuce downtown San Diego and Dali's museum in Figueres.  Nevermind that the bar is a creation of the government.  I only wish I had used the bathroom there, I was dehydrated for the first few days due to the humidity and not having the first world luxury of drinking from the faucet and therefore did not use it.  I can say, however, that myself and two others had stopped into a restaurant/bar on the way home one day to use the bathroom and it was so nice we just had to have a drink inside.  They also served gazpacho and while it was good, it was not as good as mine or others I've had.  That bar, a private bar, was most likely sponsored by a Cuban living abroad and once we stopped in there and then later went there at night with the group, I started to see stickers for the place on cars around town, very clever marketing in a country where Yelp doesn't exist.  It's called Sarao if you're interested and it's in Vedado from what I can tell.

The other stickers found in and on cars, even the old ones, were both Playboy stickers and the Apple sticker.  Peculiarly with the American flag backdrop.  I guess Apple has been clever as well.  Viva California!  Playboy and Apple at least...  and Google... gmail at least is alive and well according to some emails I received.

We spent some time in the tobacco fields (an experience that got me choked up) and on the coast snorkeling on the reef mid-week.  I thought I was being smart by only paying 2 CUC at the gas station we stopped at on the way for a large bottle of water and a small juice box container of rum.  Until I tried getting away with a free pineapple juice from the man on the beach who looked into my eyes and told me how I beautiful I was and then charged me $2.50!!  I put up a fight and he threw in a banana.  (I needed the potassium anyway after having swam out to the reef and back).  I did do an interesting swap of goods at the beach too, my swim googles for a Cuban Red Cross cap and t-shirt, brokered with the assistance of a classmate.  Apparently, my $5 goggles I got from Big Five two years ago are incredibly amazing.  I promptly suggested I organize I triathlon in the area since triathletes care about the environment and would be best suited to bring in healthy development.

Back in La Habana, I finally had a chance to talk to people that I wasn't introduced to and spent two hours in one plaza gathering information.  Normally the people that sell antique oddities, books, coins and stamps/postcards are also relatively old.  However, this plaza was full of young men that were well suited for my mother, if you know what I mean.  Probably because they make more money in tourism than working as an Engineer for the government.  It felt like a Prague square 10 years ago and there were actually hundreds of old Soviet lapel pins.  I bought one from Bulgaria, Romania and finally found one from Poland.  I found a postcard that had been sent from New York City in 1910 to La Habana.  I found a very fascinating piece of propaganda from the 50s that I bought for my post-communist BFF.  And then I found myself in conversation with a man who must have been in his 50s, called Sixto Valon.  He seemed like any normal black Cuban man, he and his younger counterparts offered me a fermented drink made from a root, called pru.

This man helped me find my way to the Marina Hemingway, answered some sociological and cultural questions I had and then asked me about the police in the United States who kill black men.  Of all the pressing questions, this was on the top of his mind.  He asked me how many times it has happened since Obama was elected, as if his presidency has prompted it.  When I went in to explain the socio-economic reasons and the racism behind it, he was mesmerized.  Luckily for him, I was able to use some of the skills I learned in my Ethnicity class last quarter on the fails of policies directed toward minorities.  Like a proud revolutionary, or a speculating bookseller, he told me that their are no poor areas of Cuba made up of purely blacks or any other minority and these kind of murders simply don't happen.  (Nevermind the human rights violations committed by the Castros)While I couldn't answer his question of how many blacks have been killed by police in the United States since Obama has been president with a solid number, we both walked away with a deeper understanding of each other's culture.  There were many other topics we discussed as well.  In addition, his email address is a gmail.

When the American journalist we met with, who has been writing from Cuba for Reuters for 25 years, told us that Fidel was never after money, only power, I asked if that was why, using my fingers as quotes, the revolution has been so 'successful' all these years.  He questioned my use of words and I explained that as I saw it, there have been no uprisings, civil wars, ethnic cleansing, after 57 years.  Perhaps they have all been hidden from Western eyes and ears HOWEVER, a man living in Cuba as a journalist for so many years wasn't able to give me any reasons aside for the collapse of the Soviet Union causing rafts of Cubans to show up in the 90s and the current 'brain drain' going on among the youth to believe that change will cause violence or vice versa.  (There is an opportunity to quote Petersen's Resistance and Rebellion here to prove that there are not enough oppressed groups to form cleavages that would cause any uprisings)  As a matter of fact, as the Economist we met with explained to us that instead of organizing society using doctors and teachers, the Cuban government is poised to use economic models to organize society using mojitos and Guantanamera players to guide tourism in the way that only a Socialist society can.

The next 10 weeks is really going to be fascinating, as we are now in the spring quarter and are taking the Cuba; Revolution and Reform class.  I am also taking in conjunction, a Human Rights class and either Mexican Policy Making or Managing a Non-Profit.  Perhaps I should return over the summer.  With some real numbers on those murders on black people in the US.

This was written with haste and I have been hesitant to write anything since I've started graduate school since my ramblings seem to have less importance than the academic stuff I've been reading and writing.   (This is considered an op-ed and I am by no means a Socialist) :) 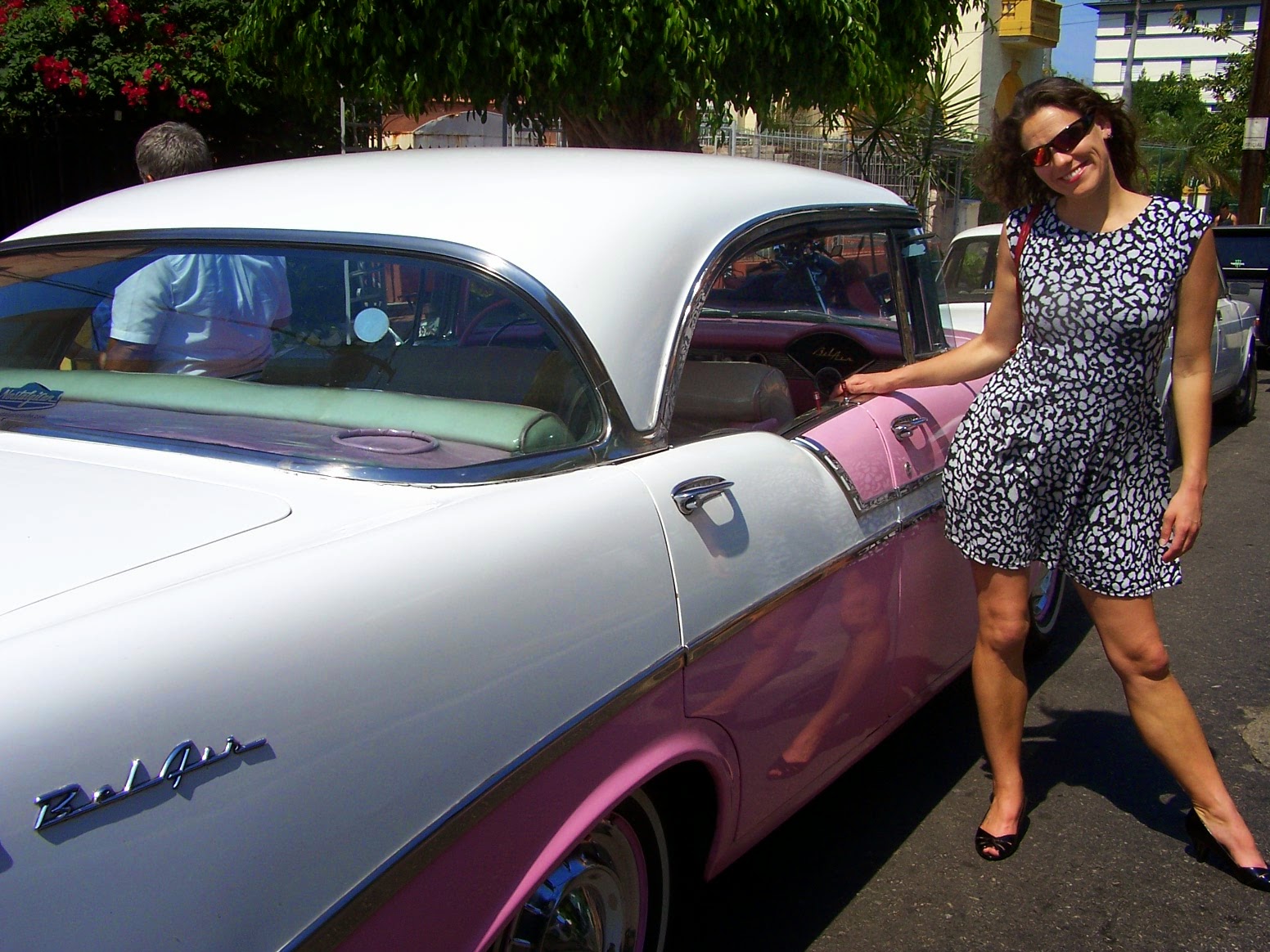